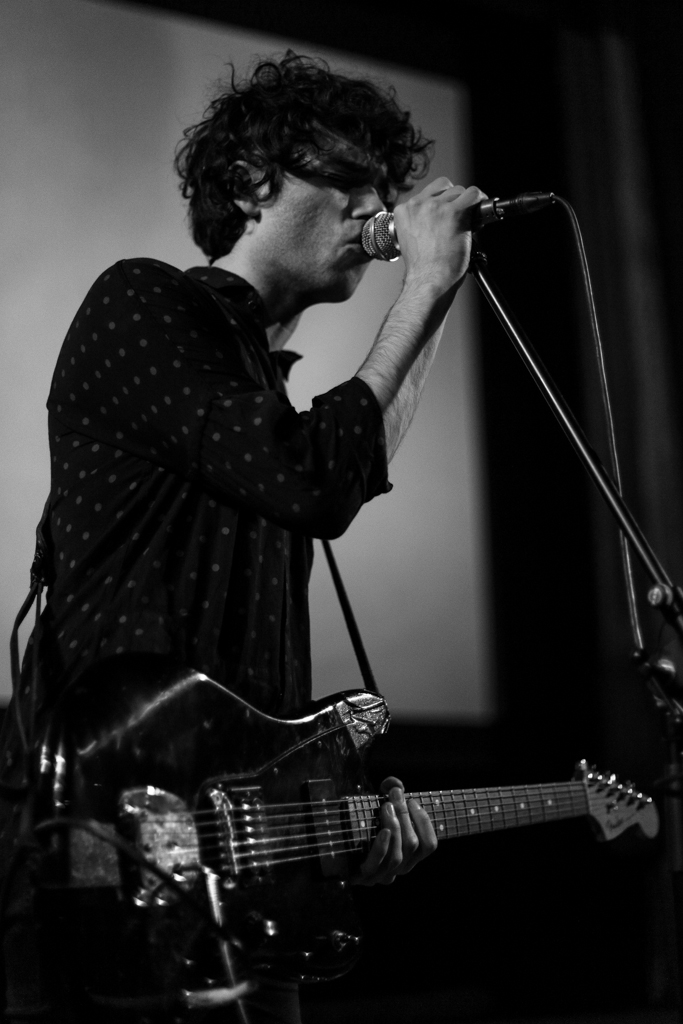 A chat with Nicholas Wood of legendary Shoegaze/New Wave outfit The KVB, to talk about his solo project “Saccades”, moving cities and the “Sexy” sound they’ve mastered.

First off, how was “Flowing Fades” written/recorded? Did lockdown provide you with more creative time?

I had gradually built up a small collection of demos after the first Saccades album in 2017, mostly rough sketches and acoustic songs, but it wasn’t until after I finished my US tour in late 2019 with The KVB that I really found the spark to work on this album. Most of the album was made after that and worked on throughout 2020.

I recorded a few songs for the albums in lockdown, including an interlude called ‘Endless Spring’, which features field recordings I made at the beach and in the forest.

In truth, most of the early part of last year’s lockdown was spent in disbelief at the world turning upside down around us, so it made the time I had working on this album a relief and accentuate the fact that I wanted this to be music for escapism.

Where did the name Saccades come from? We know it’s something to do with eye movement?

I’m not totally sure why I went with it, I was playing round with a few ideas I’d found in books and I think I just liked the way the word looked written on the page. I also worked on a remix of a song called ‘Saccades’ by a Ukrainian act called Blablarism a long time ago, so maybe it was in my subconcious from that.

You’ve been in London, Berlin and now Manchester we believe. Have you found that the move away from London has had an impact on your music?

The main impact is that as we’ve moved around over the years we’ve gradually had more space to work in and collected more equipment, which all helps in developing as an artist. London is great, but at the time it was too expensive for us, so on a whim we thought we’d try Berlin!

Obviously Berlin is known for its electronic music and inevitably that influence worked its way into my music. We’ve not been in Manchester long and its mostly been spent in lockdown, but I’m sure it’s influence will show over time.
For us, The KVB never really sounded like a London band, it feels more like “The North”, so it came as a surprise to find you’re originally from Southampton, is there a Southamptoness about your music people might be missing?

I don’t know, maybe its in the sound somewhere – when I first started playing music there was a really strong scene in Southampton with good bands and decent venues, so that had a big influence on me.

With The KVB, we’d llike to think we’ve made our own place on the map with a mixture of locations and influences coming in and out.

From the latest singles and the first album, it feels like Saccades has much of the qualities people love in The KVB but certainly a softer tone (which we also love), does this mean Kat was always the darker one?She does have a preference for grinding synths and pounding drum machines, so maybe, haha!  Saccades does share similar aspects to The KVB, I think that’s because it’s the way I write and produce music and I’m using a lot of the same equipment, but my goal for Saccades is to take the listener somewhere different.

I’ve always listened to all sorts of music, even more so in recent years, so it sometimes seems strange to me that The KVB is still labelled as dark and moody, although I get that some of the early stuff was pretty bleak and raw. I don’t mind how people describe any of it though, as long as they keep listening and coming to the shows!

I’ve seen The KVB previously described as “Sexy” which I think is quite an apt description, Saccades certainly has a sultry quality as well, are there any particular influences you think this derives from?

It’s hard to pinpoint influences for that; it’s usually just a groove on a drumbeat or a sequence – we’ve worked out that pretty much most things with a beat can become “sexy” if you slow them down to the right tempo.

How is it working creatively with your partner? Is there “KVB time” and “relationship time”, or do the two blend into one?

We’re used to it now, so it’s become natural for us to separate the two things. When we finish a tour and come home, we’re usually able to switch off and get back to normal very easily – I know there are plenty of bands that can’t stand to see each other once tour is over. Although, obviously now we haven’t played a gig or toured for over a year, it might take a bit of readjustment when we do!

I am, but I don’t get too hung up on it. I’ve had a lot of memorable times watching and playing gigs there over the years, so its alright with me.