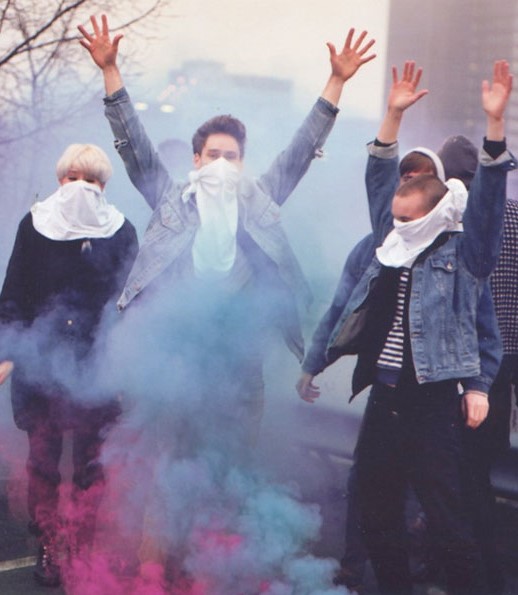 The Mystery Of WU LYF

Manchester, 2010, the tired and generic scrapheap indie formulation that had dominated the early 2000s was finally in its death throes and interest had shifted to more interesting genres in the electronic sphere, with Dubstep in particular capturing the UK.

It appeared that this long slog of impotent, uninteresting guitar music had killed indie & rock music in the country for sometime, but out of the burning scrapheap rose WU LYF. The band, intentionally shrouding themselves in mystery by refusing interviews, press and obscuring images of themselves created a buzz not seen on these shores for sometime.

To add to their growing cult following, the band formed the “Lucifer Youth Foundation” , a subscription membership that provided fans with merchandise, including a face mask they became synonymous with.

From the money gathered through the Lucifer Youth Foundation and a spot of international touring, WU LYF began recording their debut album “Go Tell Fire To The Mountain”, which saw them set up shop in St Peters Church in Ancoats, Manchester. Although abandoned, the church’s huge open space and brick walls gave the band the heavenly natural reverb sounds they became known for.

The album, released in June that year immediately became a hit amongst music fans and scene kids craving something new after a decade in the wasteland. Laden with reverb, ethereal organs and jangly lead guitar, the album sounded nothing like any of its contemporaries. Lead Singer Ellery Roberts’ almost unintelligible melodic screams cut right through the depth of sound, with pounding crashing symbols and kick drums throughout the record, played in a way unexpected for the harmonies. Foregoing double tracking, dubbing or fancy recording techniques, this record sounds like it was recorded in one take, don’t expect to hear 2 guitar parts when there’s only one guitarist.

Not enough can be said about the aesthetics here, stripped back this is just an indie album, that if recorded by another band may have no special place in music history, but the production, playing style and religious-sounding quality of the band gave birth to a true diamond in the rough.

A year after the debut album’s release, Ellery announced the band was over, done, with no frills or in depth reasoning. After the band’s end, Ellery formed Lost Under Heaven with his partner Ebony Hoorn, who have since released two albums of a sort of romantic dream pop nature.

Although Lost Under Heaven carries with it some of the spiritual nature of WU LYF, something feels missing. Confirming that WU LYF really existed in a specific space and time, and a second album probably would have diminished its potency. WU LYF IS DEAD, LONG LIVE WU LYF.